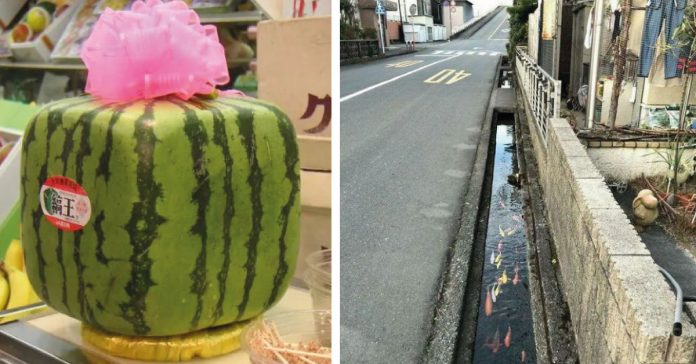 A leader in development and technology, Japan has shown for many years why it is so different from other nations. Although it is in the midst of a space crisis due to overpopulation, the Japanese have found a kind of perfect balance that helps them to be in constant growth in other areas and areas, in addition to being able to position themselves as the third largest economy worldwide in the present.

That is why it is a great attraction for many foreigners who want to travel in search of adventure and learn about a culture so different from the Latin one, for example.

The following examples are things that the Japanese do very differently compared to other countries, both in infrastructure, design, decoration or education, however, there are such peculiar aspects that will surprise you even more than everything technological and advanced that you can know.

1.In Japan they are extremely clean in soccer stadiums.

2.The channels are so clean that you can even see that some fish live there.

3.Some bathrooms reuse the water to wash your hands.

4.It is very common to find manhole covers decorated by hand.

5.Japanese public baths usually have a special place to put babies while they are busy.

6.The streets of Japanese cities are characterized by being very clean.

8.The vast majority of ATMs offer a special holder for cups or even crutches.

9.Japanese airport runway officials generally greet planes until they have safely taken off.

Nobody knows exactly how they got there, but there is an island in Japan called “Usagi Shima”, which is populated by a large number of rabbits. Some believe that the animals bred on the island after the evacuation of the people who lived there in 1940. Others say that the rabbits may have escaped from an old local laboratory, which produced large amounts of toxic gases.

11.In Japan you can seriously consider sleeping in a “capsular hotel”.

If you’re traveling around Tokyo and don’t want to spend a lot on accommodation, you might consider sleeping in a “capsular hotel.” These small accommodations are often very close to tube stations, and have shared kitchens, bathrooms, and cafeterias.

12.There is about one vending machine for every 23 people in Japan.

Vending vending machines are quite common in Japan, and they have machines for absolutely every kind of product from food to necessities.

13.It is customary to leave your umbrella in a stand located outside shops, restaurants and other businesses so that they remain clean during rainy days.

14.Our smartphones can be even dirtier.

Thinking about it that some Japanese cities offer wipes to clean mobile devices.

15.You can find square watermelons in Japan.

So that the fruits remain in this format, the watermelons are placed so that they grow in square containers, so that they end up assuming this format. The goal, initially, was to create a “different” fruit, which also serves as a decoration.

16.Some Japanese restaurants put fake dishes in their windows to attract new customers.

These plates are made entirely of plastic, and since they are made by professional artists they end up being even more expensive than the real plates. But of course they can be exposed for much longer.