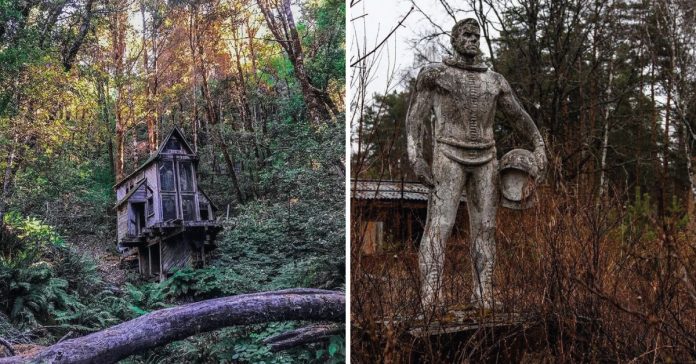 People tend to have certain beliefs in relation to the forest. Many consider it a mystical place that is inhabited by fantastic creatures, both good and evil. For a time it was believed that the attitudes humans had towards the forest and its inhabitants defined how the forest would treat them. This is how many people came to venerate these places, they appreciated what they were given because, after all, they lived thanks to them. At present, many visit them for fun, whether it is for hiking, missions or even simple walks. Even with the intrusion of humans in these places, the forests still keep a certain aura of mystery and magic, to such an extent that you don’t know what you can find. Although in 99% of cases, the greatest finding is giant mosquitoes,

1.“I stumbled upon a mysterious door in the middle of a forest path. We decided not to go any further.”

2.Seeds from the animal feeders grew a small garden.

4.A moss covered hammock near a factory in Alaska.

5.Great place to camp and tell scary stories at night while sitting by the fire.

6.“I found a cougar skull in the woods. Our guide said that this is a rarity!”

7.“I never thought such big plows existed. After researching on the internet, I found out that they used to make irrigation ditches with their help.”

8.Someone left this gnome in the branches of a tree. Maybe he’s looking after the place.

9.It seems that the forest did not like very much that they built the railway.

10.“A creepy shack sits just above a stream deep in the woods”

11.This wreckage from a crashed plane in the New Jersey woods looks like something out of a movie.

12.An English fort from WWII lost in the woods.

13.The train will no longer pass through here, but tourists are happy to walk along the old railway tracks.

14.The morning dew made the cobwebs on the bushes visible.

15.“Someone dropped a glass bottle in the woods and nature made a miniature terrarium out of it”

16.Statue of an astronaut in the center of an abandoned children’s camp in the woods