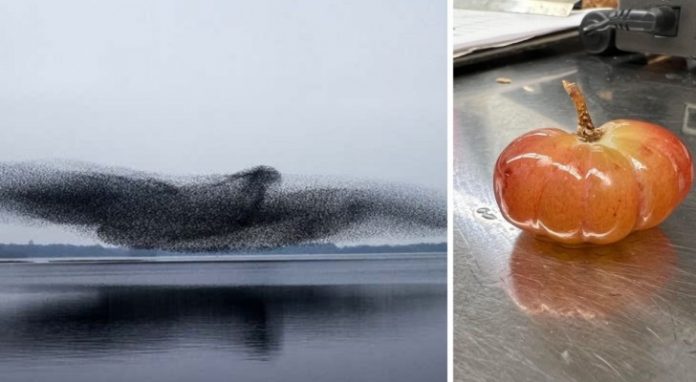 Nature never leaves anything to chance. Each thing has its own significance, it is the human spirit which can understand it and be surprised by it. But the beauty lies precisely in this surprise of the wonders of nature day after day.

The man is always trying to find a solution, not realizing that very often the answer does not exist. That is why, faced with the beauty of nature, one can only admire it and remain speechless, because it manages to surprise every time, often even causing laughter in the observer.

Here are 16 photos that show how surprising nature is.

We don’t immediately know what it is. You might think you’re looking at a miniature pumpkin, but that’s anything but. It’s a grape, perhaps dreaming of becoming something different.

This sunrise in Wyoming is really something extraordinary, it looks like the sun wants to come down to earth. There is a real column of light coming from the sky.

In the center of this city, we can see a very particular tree, which does not have a clearly defined color. It goes from its orange tip until tending towards the classic green of the trees.

The roots of these seedlings took on a decidedly curious shape, resembling a leaf.

This park is full of very special trees. It looks like their trunks have caught the sun at the top, while the base has remained in the shade and is therefore much lighter.

The clouds looming in the sky have taken on a very particular shape, they seem to represent a map of the world. Europe clearly stands out.

Birds usually move in flocks. To make it clear what it is, they chose to take a very particular shape, it looks like they wanted to represent a giant bird.

At first glance, one can be confused, one does not know very well what it is about. These are ice crystals. What is exciting is not the shape, but the color of the light projected on them.

This lemon appears to have arms, but what’s really confusing is that it appears to be thrashing about.

Every morning, nature surprises us by allowing us to observe the small drops of dew on the leaves which fall harmoniously and slowly on the ground.

Several seasons can be observed here. It almost seems that autumn and spring live together: the first represented by yellow leaves, the second by the blossoming of flowers.

Of all the places this little bird could go to roost, he chose this man’s shirt.

This tree has grown around the fire hydrant completely encompassing it, it looks like a representation of modern art.

This trunk seems to have a mark in the middle representing another tree or a leaf.

Has nature ever surprised you? How?