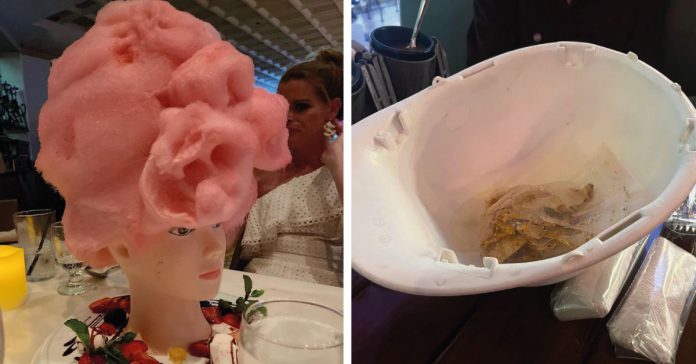 In the rules of high society, it is believed that there is an etiquette at the table, a plate for each meal and a special cutlery for each moment of dinner. However, over time, chefs have been innovating in the creation of their dishes. So now conventional cutlery or plates may not be necessary. If we take a tour of the current restaurants, it seems that serving ceramic food is in the past and now, the more extravagant the better. Some restaurants and cafes have gone even further. They use a variety of objects such as plates that can somehow fulfill their function. Sometimes it turns out to be funny, but more often it is a complete fiasco, which can be perceived as a joke by the guests of the establishment at best.

1-. It looks good, very vintage, but I think there are more cons than pros to serving food on vinyl records.

2-. You can get $2 tacos on the street, but these are $18 just because of their creative presentation.

3-. The waiters of this restaurant were surely champions in weightlifting, since instead of plates they use stone blocks.

4-. Wouldn’t it be easier to put the food INSIDE the plate?

5-. They could have left out the helmet, it’s still a bag of chips.

6-. An English pudding served in a garden spade. It gives the feeling that you dug into the earth.

7-. I think a full skateboard is too long to be a deck.

8-. I think using a drain as a glass is not such a good idea.

9-. “In this place, the dishes are a thing of the past, what is now is to serve directly on the tablecloth.”

10-. Instead of glasses, they use measuring cups. Needless to say, it’s too uncomfortable.

11-. Cotton candy is definitely delicious, but it would be a shame to ruin the model’s hairstyle.

12-. You don’t necessarily have to use plates, if not something that looks like it, like a frisbee.

13-. They were able to choose a slightly larger board so the food wouldn’t fall off.

14-. Yeah, it looks really nice and all, but I still can’t see the connection between crocodiles, giraffes, and oysters.

15-. It may be eco-friendly, but paper plates don’t last long.

16-. Better a shovel on the table than on your head.