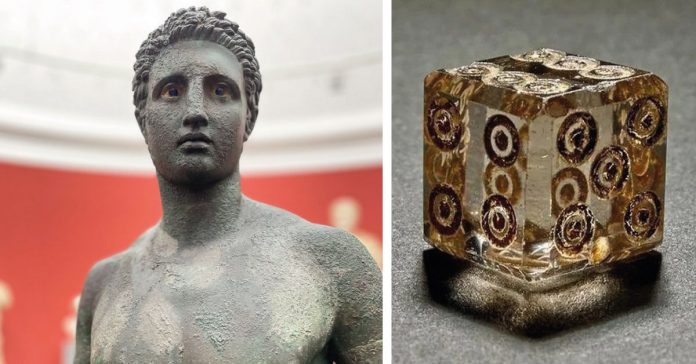 With the passage of time, it is increasingly surprising the different discoveries that people come to find in their backyards, in mountains, beaches or historical settlements of ancient peoples. In fact, thanks to technology and the age of modernity, it is possible to determine the approximate year or to whom such a thing belonged.

While in the past a spear or a pot was considered an important part of the daily life of a warrior or a king’s cook, today they are extremely important remains in the history of mankind.

Even if thousands of years pass, finding this type of jewelry or works of art is the perfect tool to create an imaginary timeline that marks how much we have changed, how they lived before and what they used. Many of these objects are part of exhibitions in some of the most important museums in the world.

1.Roman pins made of amber from the 4th century were found in the French city of Autun.

2.This device was used to have 8 books open simultaneously.

4.Gold-plated box with a set of tools for a master gunsmith. India, 18th century.

5.VI-VII century BC cat statuette made of bronze, inlaid with gold and rock crystal.

6.Greek bowl, made in the millefiori technique is from about the 2nd century BC

8.Pharaoh Tutankhamun’s sandals, they are more than 3,300 years old and have undergone a few restorations.

9.Roman rock crystal dice, being transparent it was impossible to deceive the players.

10.The famous Taj Mahal emerald weighs around 141 carats and dates back to the 17th century.

11.On the right is the original Scandinavian helmet from the 7th century, and on the left is its replica.

12.Chinese chair from the Qing dynasty (18th century), with a built-in compass.

13.Roman statue of a young Hercules in bronze inlaid with blue glass eyes. Scientists date it to the 1st century AD

14.Spear of the personal bodyguard of French King Louis XIV

15.An Italian masters bowl made of rock crystal in the shape of a heron depicting mythological sea creatures, 16th century.

16.A stone bowl carved from a single piece of sardonyx. Alexandria, 1st century BC. c.