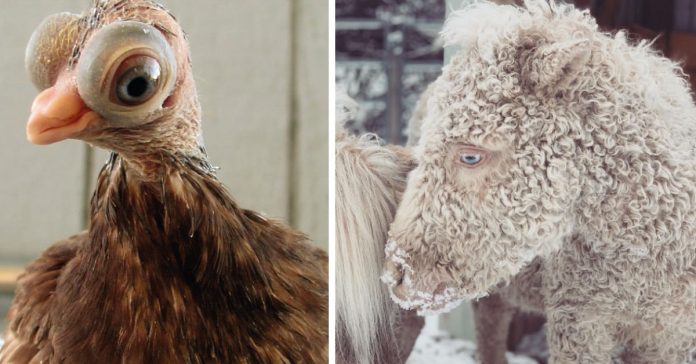 The fauna of our planet is very rich, it is almost impossible to list the number of races or species that exist in the sky, sea or land, however, it is necessary to call attention to their care and preservation, many animals are in danger of extinction and the main culprit is almost always the human being.

The following list presents a series of creatures that, due to their unusual appearance, are part of a select group of animals that are definitely not seen every day, but still amaze more than one because of how unique they can be.

It is incredible to realize the great diversity we have on the planet and how little we know about them, that is why you will see some unusual animals that you have probably never seen before.

1.The Flanders Giant is one of the largest breeds of rabbits.

The Flemish Giant rabbit is the largest breed of domestic rabbit that exists and they are generally used to take advantage of their fur and meat, however, they are also pets because they are very docile.

The Chinese goose is an international breed of domestic goose, known by this name in Europe and North America. As a fun fact, in 2021, some 500 geese stood guard on the China-Vietnam border, ready to squawk or bite anyone trespassing.

Also known as the mammoth jack donkey, it is a breed native to the United States, and descends from multiple breeds that were imported there during the 18th and 19th centuries.

It is a type of dairy goat bred by an American lady in 1927. At first glance, it may appear that they do not have ears. However, this is not the case, you just have them very small, causing them what is known as “lack of hearing”.

The fur of this breed of animal is one of the most expensive in the world, and it is one of the two breeds that make up the species Vicugna pacos , generally known as alpacas . The other race is the Huacaya.

6.Wyandotte is a chicken native to the United States of America.

Wyandottes come in various colors. The rarest is the golden blue. They developed their breed in the 1870s.

It is a very resistant breed capable of surviving long and cold winters without any type of supplementary feeding, in addition to its extremely soft fur.

The breed was first introduced in Budapest in 1907. Its appearance is very unusual, with a short, straight beak and huge eyes that appear to protrude from the head.

9.Onagadori is a Japanese phoenix rooster.

They have been bred since the 17th century on the island of Shikoku in southern Japan, and were designated a Japanese National Natural Treasure in 1952. They have a long tail that grows throughout life.

The Meishan is a breed of domestic pig named for its origin in southern China. It is a small to medium sized breed (125-180 kg), with large floppy ears and wrinkled black fur.

11.The sheep of the Hebrides.

They are very small black goats compared to normal ones and their appearance can be a bit sinister.

These goats look a bit scary, however, in 2008, he won the title of “Most Beautiful Goat” in a competition in Riyadh.

They have an elongated body, a strong torso and slender legs and come from Asian regions.

14.The Indian runner is a duck that does not slouch.

They are a breed of ducks native to England, probably imported from Asia. One of their distinctive features is that they lift their body and neck strongly.

Its name makes direct reference to the length of its horns.