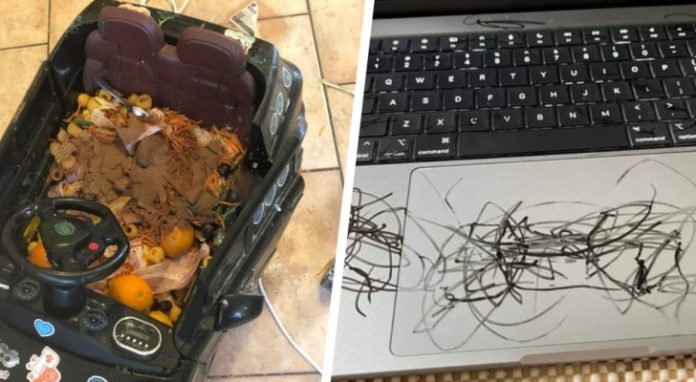 Being a child is wonderful. We approach the world for the first time, we discover the beauties, the rules of the community, and we establish our first relationships with others: with classmates, friends, relatives and family.

But to have a relationship with a child is to come up against his sincerity and his creativity. Indeed, the youngest have no brakes, they do not stop in front of anything or anyone and are able to communicate perfectly what they feel, even without speaking.

Inspired by a Reddit group , we wanted to bring together 15 iconic photos that perfectly depict the authenticity, naivety, and naughtiness  kids so often exhibit. We are sure that some of the photos will make you shudder.

My nephew felt the need to use my new cell phone as a target. @AGoodSO, we suffer with you!

“Nobody likes you”
“My daughter-in-law put it in front of my room…”. What can I say, we don’t think she accepted her mother-in-law well!

“I punished my son and this is the result…”. There is no doubt that he is an extremely intelligent child.

“This is the cake my daughter asked for for her birthday,” said @MadeMeSmile, “when I asked her why she specifically wanted the Mufasa disappearance scene, she said it was because in seeing her, everyone would be sad and she could eat the cake by herself”.

“My children know where to hit me”. The message reads: for dad, do not touch!

Everything in my fridge is in this soup car. Undoubtedly ingenious.

“My younger cousins ​​thought it would be fun to play with my Naruto ‘figurines’ while I was at school” poor @Beautiful_Fishing569, we’re with you!

“My two-year-old daughter had the idea to paint my new PS5!”

“My son teased his sister and she threw a controller at my parents’ 75-inch TV.” @ryanmaple, we’re sure your parents are anything but happy.

12. Maybe she doesn’t deserve the rosette

The rosette of this “tender” child indicates: excellent behavior… maybe not!

“The 4-year-old opened the door to my office and let his 2-year-old brother in to create this $4,000 masterpiece.”

14. I would have opted for another case

This time, we don’t want to put all the blame on the child…

“My 4 year old put cupcakes in my dress shoes. Are they ruined?” @L_i_n_u_s, probably yes, but we don’t want to dash your hopes.