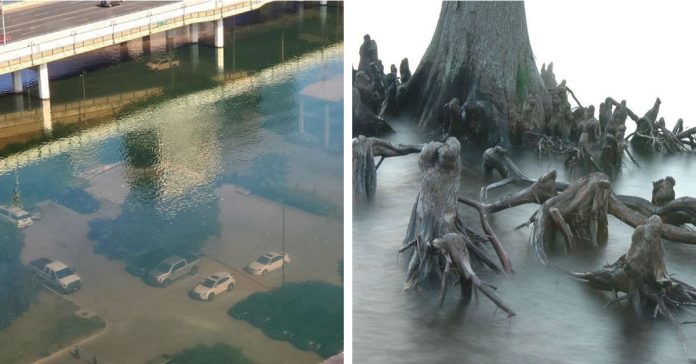 “Those bastards lied to us”, you might come to think of the meme after seeing this list. In the world there are thousands of situations that can deceive the human eye. However, this is not a big deal, because it is only enough to pay a little attention to what surrounds you so that you realize the error.

What we see is not a real tree, instead we see the spill of tea tree oil that seeped into the lake and gave us this beautiful image.

They are found in Tasmania, Australia. Although they look like huge trees, they are actually 20 cm tall.

Sunlight passing through this fountain in L’Aquila, Italy, makes it look like lava is pouring out of its bowl.

5. Eyes in the middle of nature.

In Limburg, Belgium, a bridge for cyclists was built that divides the waters of the De Wijers nature reserve pond. Its length is 200 meters. The cyclists who cross it dive into the water because the height of the walls that stop the water is at head height.

7. The eye of a stone fish… it’s not just the formation of frost.

A curious reflection was photographed in the Colorado River in Austin, Texas. Almost like an underwater city.

The comments below the image suggest that the tricky photo was taken through glass. This is justified by the fact that if you take a picture through a glass surface at a certain angle, you can achieve the effect of finding two objects in the same space. That is, there is an imposition of one reflection on another.

9. The branches of a dead tree that look just like a lion’s head.

It is the photo of a mushroom taken from below.

11.The shadow of the tree makes it look like the car has a sticker on it.

13. A giant stone rock or tree in Egypt.

14. The leaves of this plant look like hands joined in prayer.

15.The lost world of shadows

The gnarled roots of trees on North Carolina’s Outer Banks look like lost souls emerging from the depths of the waters.