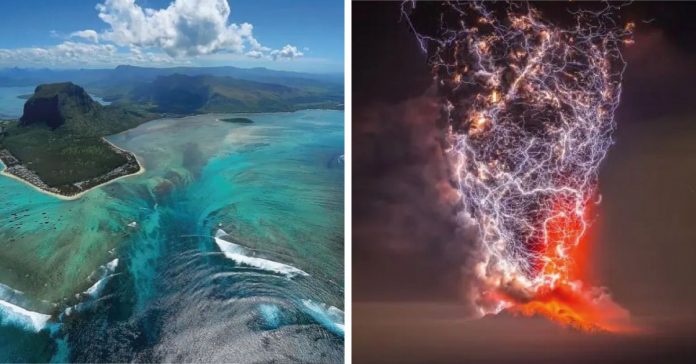 The planet is full of mysteries, some small and others larger. The Earth is too big for us to already know everything that happens on it. Our world is full of corners, variants, events, moments that we do not know. Today we are used to thinking that we have seen it all. Thanks to the ease with which we receive information, mainly through social networks, we stop investigating or paying attention to what surrounds us. However, to this day, there are mysteries in the world that have not yet been solved.

1-. A mysterious mud leak in China.

In 2013, a mysterious sludge-like substance began seeping out of a crack in a road in China. Speculations began to arise but to date it is not known with certainty what this substance consists of.

The Chinese government argued that the incident occurred due to a leak in an area that was under construction, but the explanation did not convince everyone.

This strange structure is located in the middle of the Sahara desert, and due to its resemblance to an eye, it received its name. Scientists initially thought that the “eye” (which is 40 km across) might have been formed by an asteroid impact. However, later studies pointed out that the Eye of the Sahara was the result of erosion.

It is also known as “Black Crack”. It is a huge natural fissure found in Canyonlands National Park in Utah, United States.

Despite having formed naturally, it was actually enlarged by miners in the 1950s. Today, it is one of the most important tourist attractions in the park.

While these lakes are beautiful at first glance, the reality is not so pretty. The reason they glow is Noctiluca’s Twinkles. This type of jellyfish begins to glow when the water is contaminated.

These UNESCO World Heritage-listed mountains, located in the Zhangye Danxia Geological Park, are like works of art made in nature. A true natural painting.

This forest, located in Nowe Czarnowo, Poland, has a unique and mysterious feature: its trees grow in a totally distorted way. There are about 400 trees, all planted in the mid-1930s, that grow with a 90º bend at the base.

Scientists believe that the trees became this way due to human action, but they still can’t explain exactly how.

For a long time it was a mystery why these Antarctic glaciers seemed to bleed. Nowadays, however, it is already known that the “fault” is the oxidation of the iron contained in the frozen water, which acquires a reddish color and causes this phenomenon.

This volcano is famous for its blue lace. However, its coloration is not completely beautiful. The blue comes from sulfuric gas that burns at temperatures above 360°C and comes into contact with oxygen in the air.

It looks like a rock, but it is a marine animal, which lives mainly in Chile. It has no sensory organs or brain, and is consumed as a spice in several countries, but especially in Chile and Peru.

It is located in Mauritius Island, Madagascar.

11 – A volcanic eruption alongside a thunderstorm.

One of the most terrifying (and equally impressive) phenomena ever recorded, this eruption took place in Chile, causing terror in nearby populations. Scientists explained, at the time, that the electrical storm occurred due to the electrification of dust particles released by the eruption .

12-. An ice hole in the middle of Antarctica.

This gigantic hole located in Antarctica was discovered using robotic equipment in 2017, impressing the scientific community. Much has been discussed about what could have formed it, but scientists have already concluded that it is a phenomenon called “polynya”, which consists of the formation of an area of ​​open water in the middle of fast ice.

13-. The noises within the town of Taos.

This town is located in the region of New Mexico. Many residents claim to hear a disturbing noise, continuous and unexplained to this day. Reports began to surface in the 1990s, and the most curious thing is that although many confirmed hearing the noise, some simply did not seem to be affected.

It is a phenomenon formed by extremely tiny particles of water, they are less than 0.05mm.