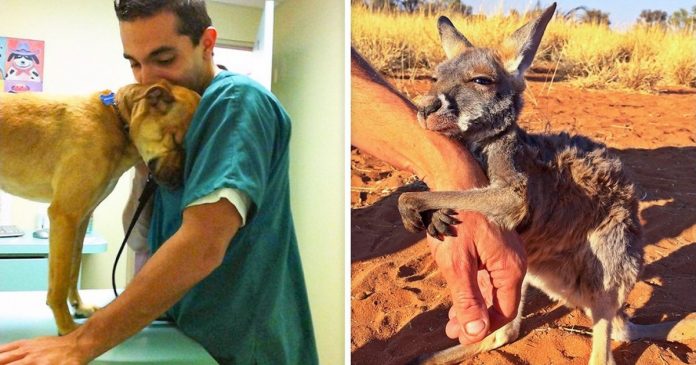 Animals never cease to amaze us. Although it is said that animals are not right or that they lack thoughts, every day we become more convinced that they can really understand many things that we say or do and that they are capable of showing their emotions.

Today we want to brighten your day with these 13 photographs of animals that have known how to be grateful to those who rescued them.

1.My family rescued this squirrel from an owl 8 years ago; we took care of her for almost 5 months and then we released her. There hasn’t been a day that she doesn’t visit us in the garden.

2.Super-dog is very grateful to the vet.

3.Although it is believed that swans can be aggressive, this image shows us otherwise. This little boy was rescued by Richard after getting stuck in a fence. The photo taken after being released and simulates a hug from the swan to the rescuer.

4.This is how my dog ​​thanks his veterinarian for his care.

5.A few years ago my family rescued this deer from some hunters. Now he visits us as a way of thanks. The deer is very calm and always stops by the window to wake us up.

6.My dad rescued this dog from a shelter and now they are best friends.

7.This little deer came to my house looking for a shelter, now he and my dog ​​are best friends.

8.Little John hasn’t stopped smiling at us since we rescued him. At first he was very weak but with a couple of care today he is completely healthy.

9.The kangaroo Abigail was sent to the Alice Springs reserve when she was just 5 months old, since then she hugs her keepers every day.

11.The Brazilian army found this little jaguar in terrible condition near the Amazon. The animal was in very poor condition so the soldiers took care of it and now it has become the official mascot of the army.

12.Rademenesa was just a 2-month-old kitten when he was admitted to an animal shelter for respiratory problems. Since his recovery, he has been in charge of helping and making the other animals feel better.

13.This puppy was rescued from a fire, now part of the fire team.