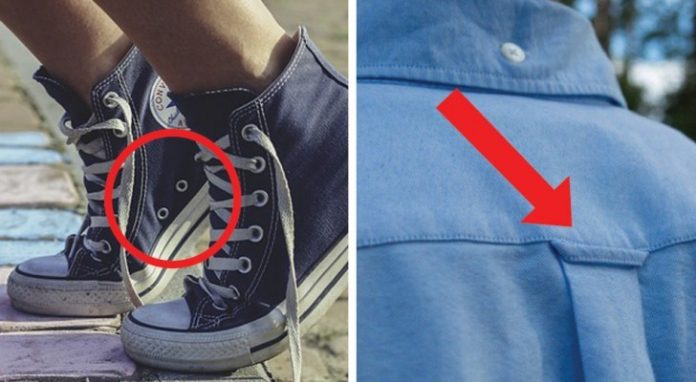 If we observe the everyday objects that surround us, we can notice several small details that are not there by chance, but that have a very precise function .

If you take a shirt in your hands, if you take a quick look at your Converses, you will discover obvious peculiarities but why do they exist? The mystery is soon revealed

The fabric ring behind each shirt

In the past, when the shirt was worn mainly by the workers to go to work in the factory, the famous little hook was very useful to hang the garment , without the need for a hanger or anything else.

The cylinder in computer power cables

The famous cylinder, whose specific name is the ferrite core , is able to isolate the electromagnetic noise that can be created inside the electrical circuits.

The small hole in airplane windows

The hole you can see on the portholes is a breathing hole that balances the pressure between the different porthole panels, with most of the pressure bearing on the outer layer.

The blue part of Pelikan erasers

To erase the paper shelf, we all know that you have to use the orange part… and what to do with the blue part? The Pelikan BR 40® rubber removes traces of ink, ballpoint pens and colored pencils thanks to this part.

Horizontal buttonhole reserved for the first button of shirts

The two holes on the sides of the sneakers…

These small holes allow the foot to experience a condition of greater stability by inserting the laces inside, in order to reduce the likelihood of blisters and spraining the ankle .

… and the two holes on the sides of the Converse

This is not only one of the distinctive features of these well-known shoes, but they also allow better ventilation of the foot , to avoid perspiration and bad odors.

In this case, this little detail has two functions: it is useful when you have to drain the water, but above all it is possible to introduce inside the exact quantity of spaghetti for one person !

The little touch of jeans

Some of you might think that the micro-pocket of jeans is used to insert small coins, but it was mainly used to accommodate pocket watches, watches that were widely used back when jeans were invented. , in 1871.

The hole on the ballpoint pen cap

In this case, it is not a useful detail for the pen itself, but it is used to prevent choking ! Indeed, if the plug were to be swallowed, the hole would allow air to pass despite the occlusion of the trachea.

The piece of fabric sold with a garment

Often, when we buy a new garment, we also find a piece of fabric identical to that which makes up the garment. Well know that it is especially useful if you want to do a test wash with old rags to make sure it does not stain other clothes !