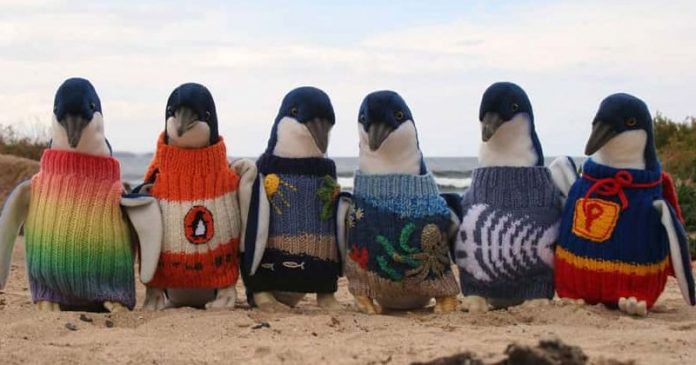 As Phillip Island Penguins needed woolen jumpers in the wake of an oil spill, Alfred Date spent his time knitting tiny clothes for them.

The 109-year-old man from Australia, Alfred ‘Alfie’ Date was the oldest person in the country for some time. Daily Mail reports that Australia’s then-oldest man, passed away at the age of 110-years-old and he spent his free time knitting tiny wool sweaters for tiny, injured penguins. In 1932 after his nephew’s birth, he was taught by his sister-in-law how to knit a jumper. Since then he started knitting.

Date said in an earlier interview that even though he was not as fit as he used to be when he was younger, he still liked to knit tiny clothes for Phillip Island Penguins as they needed woolen jumpers in the wake of an oil spill. The penguins kept from staying dry as mishap greatly affected the penguin residents of the area. Date said that when Phillip Island’s Penguin Foundation requested the tiny sweaters, he couldn’t say no in an interview with Channel Nine News. A spokesperson of Nine News said, “It’s amazing and we feel quite privileged to have him dedicating his time and effort to the Penguin Foundation.”

He added, “The girls who used to work for me, they’ll tell you I’m a sucker. I can’t say no. It’s a good way of getting along in life. You make friends all the time but you don’t make a fool of yourself either.” He started knitting more than eight decades, but this was his first stint with bird knitting. According to the foundation, Date was their “most senior little penguin jumper knitter” without even knowing that Date was the oldest person in the country at that time.

The date came to the new aged-care village in Umina, on the Central Coast of NSW after getting the call and decided to put his skills to use. He said, “I think I’d been in here about 12 hours, might have been 13. The two girls (nurses) come into me and say ‘We believe you can knit’”. Then Date quickly started working and hundreds of people from all over the world help him to knit these tiny jumpers.

They are native to New Zealand and southern Australia. There is also a colony of 32,000 penguins that live on Phillip Island, where the oil spill happened. The oil can seep deep inside their coats, which thereby brings a lot of discomfort to these penguins because of the grease. It can hamper their hunting abilities as they are more susceptible to catching a cold. The date said, “I like to make it without mistakes and I don’t excuse myself for doing it. (But) I think there is an excuse for a person who’s gone beyond the normal span of life.”

The penguins are given a jacket to wear when they arrived so that they don’t get the toxins or preen their feathers.