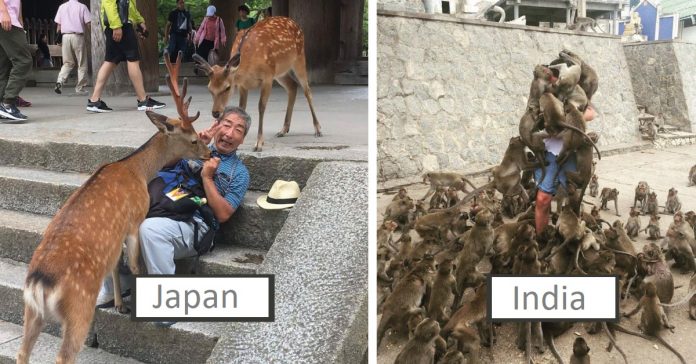 Although all animals have a place to which they belong and where they can or should live peacefully, sometimes circumstances take them to unexpected places and make it their home.

The natural habitats of the species must have certain climatic conditions and are suitable for them to survive for a long time, however, the presence of human beings can completely modify their stability. Although the migration and transfer of many of these animals also have a lot to do with their being from one place to another.

The following list presents 10 places that exist in the world that are now home to a specific species and that have become a kind of symbol for the country that has become their home.

The iguanas of Parque Seminario are now like family. They eat mostly vegetables and people put them on the ground like someone who feeds pigeons.

The Galwar Bagh complex is a Hindu pilgrimage point known as Shri Galta Ji, it is also called the monkey temple because of the large colony of macaques that live there, it is dedicated to the monkey god Hanuman.

Located in the Zao Mountains, near Shiroishi, in Miyagi Prefecture, we find the Zao Fox Village or Zao Kitsune Mura where more than 100 foxes of six different species live.

The first alpacas arrived in New Zealand in 1986 from the Chester Zoo in England. Imports from Peru and Chile in the late 1980s and early 1990s formed the core of today’s national alpaca herd.

In Caracas, it is estimated that there are about 400 macaws, a density that is greater than what currently exists in its natural habitat. Precisely, the population of macaws in the forests of Venezuela has been lost due to illegal trade, which in the long term, can generate imbalances in the ecosystem.

The deer and the temples are the main attractions of the city. In the area you can find many places to buy food for tourists to feed these animals.

Groslocker’s marmots are quite popular with tourists, so it’s not uncommon to see the large rodents get relatively close to humans in the hope of getting a snack or some food, but they won’t let people get too close.

Located in Ehime prefecture, southwestern Japan. Its fame is well deserved: there are 36 cats for every inhabitant.

Pig Beach or Pig Island is an uninhabited island in the Bahamas. This place is a magnet for tourists who want to see how happy domestic boars live. It is not known for sure how they arrived on the island.

10.You will go from Australia

The Australian white ibis has become established in urban areas on the East Coast in increasing numbers since the late 1970s. It is commonly seen in parks and public spaces.