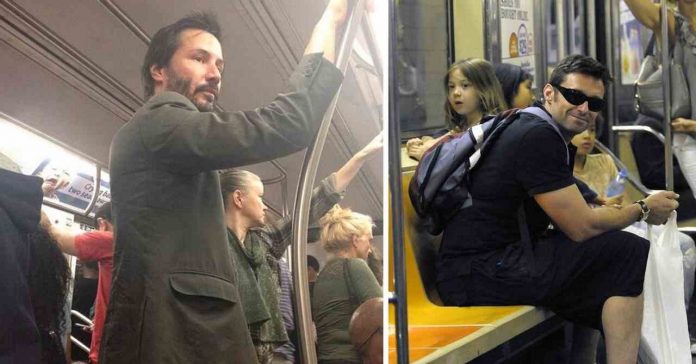 Maybe one day you could sit next to one of them

Probably when we think about the life of celebrities we imagine that every day is full of luxuries, parties, extravagant dresses and trips in private planes or elegant cars.

However, sometimes we forget that they are people just like us and go to the movies, to buy a coffee, to the gym or to go for a bike ride, and they do it in the most ordinary way, without catwalk suits or limousines.

It is true that going to your destination in a car and with a driver can be much more comfortable than going on public transport, which is usually crowded and has long waiting times. But in cities like New York or London, public transport is so efficient that using it is a better option than driving your own car.

Thus, in many cities, moving by bus or train is the best way to get to your destination and some celebrities know it. In addition, they help the planet by reducing their carbon footprint.

Here’s a list of 10 celebs who’ve been spotted on public transportation (hopefully, you run into one someday):

The British actor rose to fame in 2012 when he starred in The Amazing Spider-Man. Although this superhero would walk around the city swinging with a spider web between the buildings; Andrew uses the New York City subway.

One of the most famous musicians in the world and with a fortune of one billion dollars is not afraid of public transport. In 2018 he was caught in an economy class train car going from London to West Sussex, where the ex-Beatle lives with his wife, Nancy Shevell.

After giving life to the intelligent Hermione Granger in the Harry Potter saga, the actress took a break to go to Brown University in the United States; and she then she was spending time in New York and London. In fact, in 2016 and 2017, the actress was hiding books in the subway stations of these cities so that users could find them.

Despite having played two queens of England, Elizabeth I and Elizabeth II, and having a successful career on the small and big screens, this actress uses public transport like everyone else. In 2015 she was seen riding the New York subway.

This Australian actor is recognized for his role as Wolverine in the X-Men saga and for his portrayal of Jean Valjean in Les Miserables, which almost gave him an Oscar. This film is musical and Jackman is very good at this.

New York is the cradle of musical theater, that is why the actor lives there, and knows that the best way to get around the city is by taking the subway; he even takes his children with him on subway trains.

The invisible woman of the Fantastic Four is a regular user of the New York subway. The actress lives with her children and her husband Cash Warren in this city and they have all been seen using this means of transport.

The famous actor from The Matrix and John Wick is well known for his humility and simplicity, so it’s no surprise to see him regularly riding the New York subway. He was even once seen giving up his seat to a woman in need.

Dr. Remy Hadley, nicknamed “Thirteen” in the series Dr. House, is an actress who was born and raised in New York, so she is used to using the subway to get around the city; and she keeps doing it naturally.

The actor who played the famous Tyrion Lannister from Game of Thrones, was seen in the New York subway; however, this is not his only means of transportation as he also walks the streets of the city with his scooter.

Known and loved for his portrayal of Forrest Gump in 1994, this actor has a peculiar taste for old typewriters and also supports companies that develop new electric car technologies. With this we can say that Hanks cares about the environment and therefore public transport is his favorite.

What did you think these images?