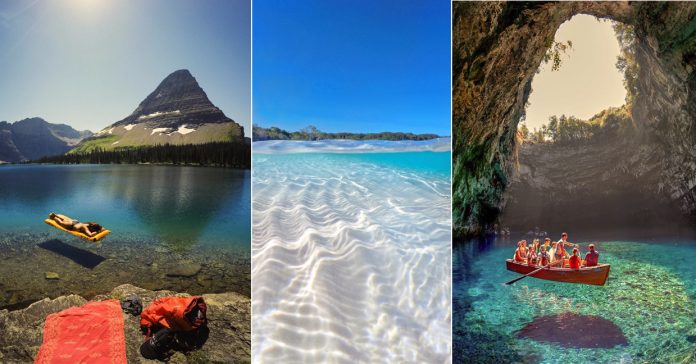 What if you get a chance to float in warm, tropical waters, all around you, the shimmering water is crystal clear. You can see colorful fish flitting and float around you.

As we all know 75% of our planet’s surface is covered with water. They are lakes, and oceans and everything is natural. Here are 10 amazing places with crystal clear water if you love water.

Plitvice Lakes National Park is the country’s oldest national park and it is also a UNESCO World Heritage Site to boot. In 1949 it was found and it has 16 waterfalls and interconnected lakes spanning more than 70,000 acres. More than 1 million tourists annually visit there. The runoff from the nearby mountains has formed these lakes and they’re separated into geographical clusters. The color of the clear water ranges from blue and grey to green. The turquoise depends on the resident organisms, amount of minerals, and angle of the sunlight at any given time of the day.

New Zealand’s biggest freshwater spring is situated near Takaka in the Golden Bay. This was once named Pupu Springs and its waters come from huge Aquifers. The water is pumped in at almost 3,700 gallons (14,000 liters) per second. The water’s clarity is because it is filtered for up to a decade by the surrounding rocks before being pumped into the pools. The National Institute of Water and Atmosphere (NIWA) tested the visibility of the water and determined it to be 63 meters (206+ feet) in 1993.

It is ensconced in Jiuzhaigou National Park which situated in the southwestern province of Jiuzhaigou. This is also a UNESCO World Heritage Site and it consisted of multi-level waterfalls that are visited by millions of travelers yearly. The lake is famous for its crystal clear multicolored water. Due to a variety of local algae, the calcium sediments on the lake bottom, and the colorful reflections of the surrounding trees there are about five different colors. October, when the colorful foliage makes it even more beautiful is the best time to visit there.

Legends say that this lake is named for a brokenhearted nymph who committed suicide when the god Pam didn’t return her affections. This was found just outside of popular Sami and it’s around 20,000 years old. Visitors can see a beautiful array of blues when the sunlight hits the water. The cave there is a natural aquifer and it filters the water leaving it incredibly clear. According to the veteran visitors, the water here is so clear that anyone boating on the lake appears to be levitating.

The Green Lake or “Gruner See” is found in Styria in southeastern Austria and it has clear green water. The water originates from the Karst mountains. The benches, footpaths, underwater meadows, and 50m visibility has made it popular with divers. Water sports were banned there in 2016 as the experts were concerned that divers would stir up too much sediment and ruin the clarity of the water.

Ambergris Caye is the largest and most popular island in Belize. This place is perfect for all the visiting scuba divers because of its crystal clear water. There are approximately 40000 people visit there to dive here every yea. They want to see some of the sea life that inhabits the famous Hol Chan marine life reserve 1.5 miles off the coast. As the sunlight is broken up by the water molecules, the water is beautiful, clear, and in blue color. The color is lighter as the sun’s rays bouncing off the fine sand.

According to some people, Palawan Island is the most famous place in all of the Philippines to swim in glassy-clear ocean water. It is located in the Sulu Sea and the sub-China Sea. There are more than 1 million travelers each year for the wildlife sanctuaries, the UNESCO world heritage sites, the reefs, and the water. You can go for scuba diving at the site where a dozen World War 2 Japanese shipwrecks can be found if you visit the place.

This river is situated in Bonito, four hours away from Brazil’s capital. It’s Brazil’s most beautiful. You will discover what some have called a “natural aquarium” complete with brightly colored fish and aquatic plants there. The water here comes from actual Artesian wells. It springs from the ground to form multiple pools. The visibility of this water is 60 feet or 18 meters. The Brazilian government wanted to protect the river they have deemed the area around it as a national park.

This lake is located in Montana and it is the western USA’s largest freshwater lake. It is a remnant of Missoula, a large inland sea. It covered much of the area roughly 13,000 years ago. It has a depth of 113 meters at its deepest point. This lake is also “the cleanest lake of its size” on the planet. The water originates from the Rocky Mountains.

Blue Lake is also known as “ROTOMAIREWHENUA.” It is officially the clearest lake on the planet. The lake is ensconced in the popular Nelson Lakes National Park. A group of scientists tested it in 2011 and proven to be the official “clearest freshwater body known.” Its visibility is reportedly 262 feet. The lake is clear as distilled water. The water comes from a local spring and its clarity has a local native tribe claiming that it is “sacred.” The light hits the surface of the lake just right and turns it a striking shade of clear blue in the summer.